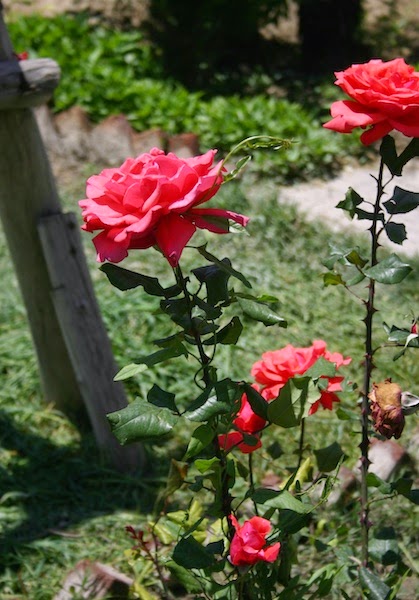 Even though some seasons are harder than others, each season has its challenges.   The challenge may be children who are sick or unruly.  It could even be conflict at work or health problems.  On the other hand, your challenge could be too much time on your hands or being too busy.  Our season is full of finishing school and figuring out what life looks like here without me working at the international school.   Life here is always a challenge whether it is a security issue, no electricity, or being short staffed.  It can feel like you are in an endurance race.  Sometimes you are running well, and other times you just want to curl up by the side of the road and take a nap.   Our verses from James this week talk about enduring patiently the testing and temptation that come our way.   They are taken from James 1:12-13 NLT.

God blesses those who patiently endure testing and temptation.  Afterward they will receive the crown of life that God has promised to those who love him.  And remember when you are being tempted do not say, “God is tempting me.”  God is never tempted to do wrong and he never tempts anyone else.


I think we can all agree that the Israelites wandering in the wilderness are not a good example of enduring patiently.  They were quick to whine, complain, and rebel against the authority that God had put in place for them.  In contrast, David and his men endured patiently as Saul sought to kill David.  In the Psalms, we see David in the wilderness crying out to God.  His focus was on God and what God could do.  The Israelites were focused on themselves and what God was not doing for them.  David was not perfect.  When he was king, he gave into temptation, slept with Bathsheba, and had her husband killed.  But he would be the first to admit that he would have been able to resist the temptation if his focus would have been on God and not himself and his supposed needs.


The other day I came across this quote by Elif Shafak, the author of 40 Rules of Love.  I have never read his book and don’t know anything about the author but this quote does a great job of defining “patient endurance.”

As followers of Jesus, patiently enduring means not trusting the end result but trusting in the God who will make all things new.  Our focus is on God and who He is and not on ourselves and our circumstances.  It requires being content in all circumstances as we take daily steps of faith.  Testing and temptation make life challenging.  There will be tears.  There will be times on our knees asking why.


As many of you know, last year was a hard year for our family.  People that we knew died here in senseless acts of violence.  Many of us were evacuated for the summer and in the fall, we returned to a much smaller team.  Then in January, our school closed.  It has been a year filled with tears but also great joy.  I don’t know if we have patiently endured but we do feel stronger in our faith.  God has been more real to us in the last year, and we can see him working all around us.  This next year doesn’t look to be any easier.  There will be times we will be tempted to give up.  Other times we will wonder if it is all worth it.  My prayer is that we will keep our eyes on Jesus, the author and perfecter of our faith.  I pray that the seeds that have been planted by those who have gone before us will grow and that we will continue to water them until they fully developed.


What is hard for you right now?  How are you being tempted or tested?  What does enduring patiently look like for you?  I would love to hear how God is working in your life.